Holiday/Business trip started great, ate about a kilo of that superb cheese they have in Qantas lounge and drank fantastic wine.

I paid an extra $20.00 each and got front row seats on the plane over, and an extra $10 each for inflight entertainment, an Ipad that I spent nearly the entire flight trying to work out how to use, so much for a cheap flight!

We decided to explore the hotel which was huge, my first thought, we had booked into a fat camp for old Germans. I had felt a bit blobby when I left Oz but next to those bodies I felt like THE BODY

As there was not one single German in gym (only Aussies) clearly a fat camp was not the case, more likely an old age camp, Jazzy and I were youngest by miles.

Jazzy and I decided to use all the hotels facilities, so went to the gym every day, did the aqua aerobics, hired their bikes, did the pool yoga and drank in every bar, (well I did)

Jazzy did the para sailing. You could hear her screaming, “oh my God” “oh my God”, going around the whole of Sanur Beach, I have it recorded 300 metres in the air. 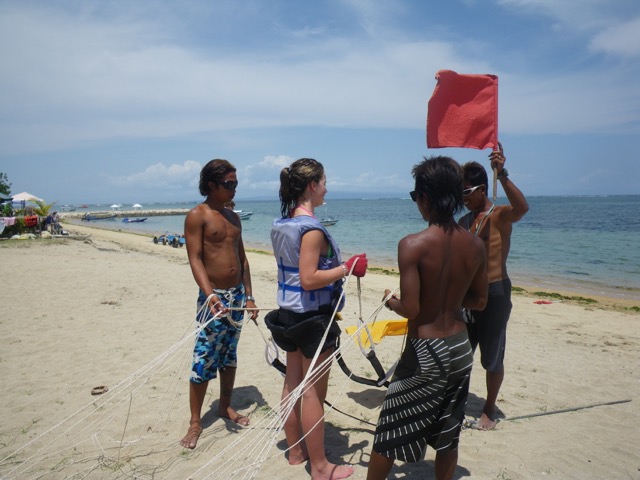 Needless to say, I did not follow her but remained firmly on my towel

We had a massage everyday on the beach and shopped until we dropped.

The new beach bag I bought lasted 4 days and the “genuine” D and G hand luggage didn’t actually make the plane before it broke.

Hired a car one day and even tho the guy tried to talk me out of driving and to get a driver I stuck to my guns,10 mins later we were lost, so much for google maps!

At the traffic lights, I asked a guy on a scooter which way to Ubud and he said follow me, so we did.

Clearly was the back way. We went off the beaten track very early on and just drove past kilometres of rice paddys, then cement works, then silver factories, eventually got to Ubud, gave the guy some cash and went to the Lotus café for lunch, yum

Shopped at Ubud markets and then headed back to Sanur, got lost again.

Every time we pulled up at traffic lights Jazzy yelled out the window to the scooter riders alongside us for directions and somehow we found our way back. Just near the hotel I found myself in the wrong lane, unfortunately so did two cops on motorbikes, who signalled for me to pull over. No leniency for tourists, they told me I had to go to court next day and pay 200,000rupiah. Someone had told me to pop 50,000rupiah inside my international licence which I had done, I handed the licence over to them, they looked at it and handed it back to me, waving me on, the 50,000 rupiah had “disappeared”

Jazzy had wanted to stay at the Hard Rock Hotel so after finishing our business in Sanur we moved to Kuta.

I thought Id brave it and hire a scooter, how hard could it be, whole families ride around on one scooter and that includes the family pets!

Fearless Jazzy was sitting side saddle behind me videoing, my knuckles white and I was secretly trembling, well possibly not so secretively, when Jazzy told me to speed it up a bit because a dog had just over taken us and it was walking!!

Clearly an exaggeration but as my confidence grew so did my speed. Initially I was too nervous to turn right so ended up driving miles past Seminyak, until there was no traffic and I could do a u turn.

Parking was a bit of an ordeal too so I just got a local to park it for me. Proud to say at the end of the day I was buzzing about like a local, including beeping horn incessantly.

I had been looking forward to the Hard Rock cobb salad with blue vein cheese dressing for months, but after getting bali belly a few hours after eating it have gone of it for life!  (though it was probably the water I drank from those recycled glass bottles)

I thought on the last day we would book a pool cabana so we could store hand luggage after checking out. I spent a day working out which one had the best sun aspect so I could sun bake all day and as a result booked cabana 2, perfect, or so I thought, no one told me that the next day was Guyanne Day some religious holiday and that cabana 2 just happened to have a temple behind it where people burnt offerings… by 10am my cabana was like a smoke house!!

We couldn’t even change cabanas because they were all booked, we went shopping instead!

Got to airport, went thru all the security checks and got stopped at the last one, told we had over stayed our visa.

Big tip to anyone heading there make sure that when you put amount of days of stay to do it in 2400 hrs!! We arrived at 2pm but left 7 days later at 10pm..so even tho I put the dates we were staying when visa was issued it was for 7 days, we were 8 hours late… 200,000rupiah fine each.

I tried arguing the point, big mistake, next thing we were hauled off into room with a man with a gun and told our flight would be cancelled.

I was nearly having a heart attack, I thought we would be hauled off to sit in a cell alongside Shappelle Corby at any moment, Jazzy was furious with me.

I did some serious apologising, flashed 400,000rupiah under his nose and our passports got stamped and we were free to leave

We ended up with seats 1a and 1b again because the guy misunderstood what I was saying (shame) and it didn’t cost me a cent extra though my flight magazine was the same one I had on the flight over with my half completed suduko (well perhaps not half, its struggle on tranquilizers and bourbon and chardonnay)

Got home at 3am to find our cat, Ben had been locked in the study entire holiday, he had tried to “dig” his way out by scratching at the carpet by the door… totally ruined and the smell of cat pee would kill a horse… fortunately after a can of cat food he was fine, carpet was not.