This should probably be posted under  “Mindful Monday” but I havent got around to writing about my introduction to “ mindfulness” yet ,so it would be out of order.  Anyway I am back in the bath, with my charddy , so  it really is another bathtime blog!

A friend and I decided to go on a weekend silent retreat, hosted by a couple who focused on Mindfulness. I had completed the MBSR Course (Mindfulness Based Stress Reduction course,  I wasnt actually stressed when I started, nor when finished, rather suffering from a broken heart and grief, but that’s for another day .)  I had done the day of silence as part of the course but not a whole weekend, I was excited at the prospect.

Half my friends thought it strange I pay to go away to be silent , when I could stay at home for free and be silent as I live on my own and the other half didn’t think I could stay silent… nice friends!😂

On the  two hour drive there I told my friend joining me that I did not intend talking and so for her not to be offended if I ignored her all weekend.

The first night you can talk and so over our vegan, vegetarian, mung bean, greeny style dinner we all chatted away. We met in the meditation hall afterwards, watched a mindful video, did a guided meditation and that was it.. lips closed.

The following morning I got up and went to the dining hall for breakfast. The buffet breakfast comprised of porridge, muesli, fruit, some unrecognisable , nuts  some definitely unrecognisable , maybe even bush nuts and greek yoghurt , not  an egg or bit of bacon to be seen and horror of horrors no toast or vegemite.

I was starving after my plate full of healthy greens the night before , but had to settle for a cup of tea. The dining room was full of people and the only sound you could hear was cutlery clanging on peoples bowls, and possibly my stomach rumbling. Everyone remained silent, including me.

The day was spent meditating, walking around the 200 acres of bush, listening to talks , yoga, qijong, watching mindful videos, in silence ,  the evening was more of same.

Its quite an empowering feeling being silent amongst so many people and by Sunday I felt a real sense of calm, I didnt want to talk, my mind was present and I felt peaceful. I did however feel hungry and so I was very happy to see bread and a toaster included in the breakfast buffet. I toasted up my bread, spread the butter and looked for the vegemite… no vegemite, only vegan style peanut paste.

Most people had taken their breakfast outside to eat ( it can be off putting eating in silence with just loud swallowers or clanging cutlery for noise) so over the weekend people had elected to eat outside rather than the dining area.

I started to panic a bit.. had I forgotten  how to talk? Did I think I was whispering and I wasnt?  Wasnt any sound coming out? So I asked one more time, this time a little louder , she responded , with a heavily accented ,  “vwot is vegemite  ? Im from Poland.” Phew! 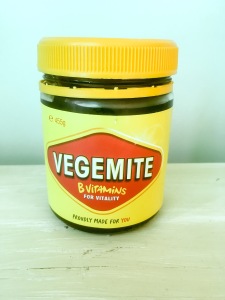 I  explained it was a spread to go on toast, and she went off to ask and came back with my vegemite.

I went to another silent retreat a few months later, I was walking in the bush in our free time , being silent, when I saw a snake slithering across the path up ahead. Another retreater was walking ahead of me totally oblivious to the snake, Melissas words rang in my head , so instead of yelling out “snake” I ran to the lady, tapped on her shoulder and pointed to the snake, not a word was uttered from my lips.

So yes Ive been to a silent retreat and stayed silent!

2 thoughts on “A BATHTIME BLOG : “A not so silent, silent retreat””